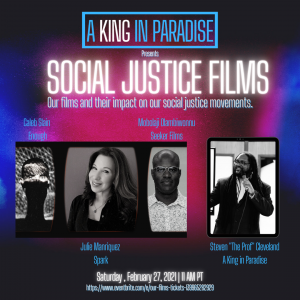 Social Justice Films: Our films and their impact on our social justice movements

Our films and their impact on our social justice movements

Films are the books of our generation...This democratization of storytelling has meant that social justice movements can tell their stories in real-time.”
— Steven "The Prof" Cleveland
LOS ANGELES, CA - CALIFORNIA, UNITED STATES, February 16, 2021 /EINPresswire.com/ -- If the events of summer 2020 have shown us anything, it’s the power of media in social justice movements. In this installment of A King in Paradise's discussion series, creator, filmmaker, and California State University - East Bay professor Steven "The Prof'' Cleveland will be joined by three dynamic guests to discuss the impact of film in the social justice movements of our past, present, and future.

“Films are the books of our generation, and we live in an era where the power of film has come to all citizens via the technology of cell phones,” Professor Cleveland says. “This democratization of storytelling has meant that social justice movements can tell their stories in real-time.”

Writer/Director/Producer Mobolaji Olambiwonnu, Director Caleb Slain, and Creative Writer/Screenwriter/Producer Julie Manriquez will be joining Professor Cleveland in this timely discussion. In the spirit of A King’s previous events, “Social Justice Films” will answer crucial questions, this time in reference to how social justice films, like the upcoming A King in Paradise, will take us to the next step of our Black Lives Moment, and every civil rights movement moving forward?

Register for virtual Zoom panel, which will also be broadcast on Facebook live, here. Visit the website to find out more about A King in Paradise and how to support the project.

A KING IN PARADISE is a multi-dimensional project that explores the untold journey of Dr. King’s five days in Hawaii during September 1959 and the impact of this journey’s legacy on our current social justice movements. King was invited to speak at the Hawaiian State Assembly one year after surviving a stabbing attempt, and a mere three weeks after the Hawaiian Islands achieved statehood. This project will explore the impact of Dr. King’s speech on those in attendance and subsequent generations, and use this impact to inform a film, course curriculums, and other education “impact projects”.