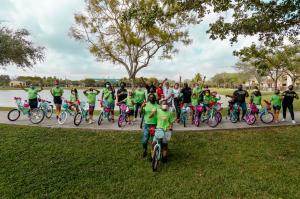 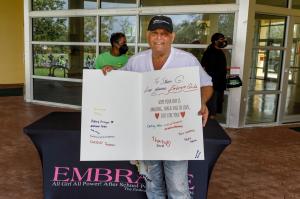 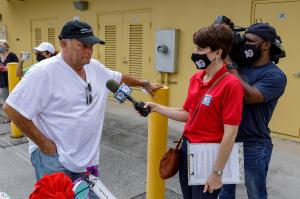 We decided to embrace the Embrace Girls because we love what these children stand for, and the fact that many of them have overcome tremendous adversity in their lives.”
— Steven G
MIAMI, FLORIDA, USA, February 16, 2021 /EINPresswire.com/ -- “It was an amazing day,” Steven Gurowitz said. “I don’t know who cried more, me, the girls, or their mothers.” An amazing day indeed. Gurowitz, the Steven G of “Interiors by Steven G,” the high-end, Pompano Beach interior design firm with a roster of international clients, had just spent the morning in Miami’s Women’s Park, making good on a generous Christmas promise.

When he was done 29 girls, members of the Embrace Girls Foundation Inc. program, were proud owners of new, custom-built bicycles with matching helmets and kneepads, their smiles as radiant as the sun overhead.

“What I’ll remember is the gleaming smiles,” G said. “But the best part was talking with the kids, telling them you can do anything in this world if you want it bad enough.”
The Saturday, Feb. 13 bicycle pickup was born during a Dec. 2020 Christmas party Interiors by Steven G hosted honoring Embrace girls who had perfect attendance at various Embrace functions during the pandemic convulsed 2020. Despite filling a group Christmas present wish list of requests, G said he wanted to do more. G decided gift certificates for bicycles was not enough, instead having each girl measured for a bicycle and choose the color.

The bicycles were delivered during what the girls were told was a pre-Valentine’s day party in Miami’s famed Women’s Park.

“I’m so happy I got a bicycle,” said Syylar Hulse, 10, an Arcola Lakes Elementary student and Embrace member for three years. “Now I have to learn to ride it.”
Hulse earned her purple and peach bicycle winner of the Embrace Martin Luther King birthday essay contest. Her mother, Lachanze Williams, said Embrace has been a life changing addition to Skyla’s life.

“Every day I would pick Skyla up from school I would see these little girls in green tee shirts and their hair was always up and they looked so pretty, and when I asked Skyla what program that was, she said Embrace,” Williams said. “What Ms. Lawrence is all about is teaching the girls about loving themselves and carrying themselves like ladies. Since Skyla has been in the program she has really blossomed.”It’s that attitude that Steven G says made him fall for the program.

“We decided to embrace the Embrace Girls because we love what these children stand for, and the fact that many of them have overcome tremendous adversity in their lives,” G said. “The things we take for granted in our lives mean so much to other people who don’t have them." G knows a bit about adversity – his first job in designing was making deliveries for another company.

Born and raised in New York City’s Forest Hills, Queens neighborhood, G attended Russell Sage Junior High and Forest Hills High. His grandparents retired to Miami when he was 16, and he fell in love with the city after one visit. He moved to Miami when he was 20 years old and never left. G’s first job in the design trade 47 years ago was delivering goods for another design firm. He started Interiors by Steven G 37 years ago, using customer complaints about the old firm as examples of what not to do with his.

“One thing I heard a lot about the designer I worked for was he was good but never finished a project,” G said. “We make sure our work is finished. When people walk into an interior by Steven G, it is finished.”

The climb to the top was not without cost. G admits to dedicating so much time to the business that his daughter “basically grew up in a single parent household.
“It took hard work, long hours, dedication, and giving up a lot of things to get here,” he said. “Many people suffer along the way because of your inability to be there.”
G said he was taken with the Embrace program almost as soon as he walked into the Christmas party. “We love what they stand for, and how amazing they are as students,” he said.”

Embrace founder and CEO Velma Lawrence “has an amazing heart, and you can’t do this work with having that heart,” G said. “She’s driven, committed, dedicated, and real. She’s not here for the limelight, she’s here to help these children, and I’m here to help her.”

“Steven’s support means the world to us,” Lawrence said. “He truly understands our mission and embraces our commitment to bringing out the best in our girls.”
Founded in 2000, Embrace Girls Foundation Inc. provides uplifting, girl-centric programming for 166 girls in seven Miami public elementary and middle schools and one private school. Embrace also partners with many other schools to bring programming and services to those institutions.

Parents Alicia Brown and Donndra Kee-Pearce were so taken with Embrace when daughters Sydney Mortimer and Jaida Pearce were in the program that they’re now Embrace volunteers.

“Sydney can walk into a room and have a conversation with anyone, no matter their age or background,” said Brown, a Miami educator, of her now 24-year-old daughter. “She’s comfortable in her own skin, being her authentic self, something that can be difficult for black girls. Embrace gave her that foundation.”

Jaida Pearce, 24, joined Embrace when she was eight, Kee-Pearce said. “My daughter is dark-skinned, was always the tallest kid in her class, and she hated standing out,” said Kee-Pearce, a pharmacist. “Once she was a part of Embrace, I saw a totally different kid. Embrace encouraged her to love the skin she was in.” Jaida is studying pharmacology at Florida A & M University.