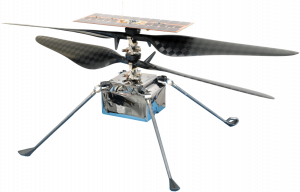 NASA has $2.7 billion, the efforts of thousands of people at hundreds of manufacturers, 7 months to travel 146.3 million miles on the line today.

FAIRFIELD, NEW JERSEY, UNITED STATES, February 18, 2021 /EINPresswire.com/ -- NASA has $2.7 billion, the efforts of thousands of people at hundreds of manufacturers, 7 months to travel 146.3 million miles, and all the anticipated scientific discoveries on the line today as the Perseverance rover, a car-size tribute to the miracle of manufacturing, science and technology that will enter the Martian atmosphere at at 12,000 mph and need to slow to around 2 mph to drop the rover softly onto the surface of Mars. The final descent is known as “7 minutes of terror,” when the landing craft is out of communication with NASA as it plummets through the Martian atmosphere to reach the surface. It is a a 3-mission project to collect, launch, and safely return samples of the martian surface to Earth that began, conceptually, in 2011.

The rover will search for past life on Mars and collect soil and rock samples for future return to Earth. The 4 scientific objectives of the Mars Exploration Program's science are 1) to look for habitability by identifying past environments capable of supporting microbial life, 2) to seek biosignatures, or signs of possible past microbial life in those habitable environments, particularly in special rocks known to preserve signs over time, 3) to collect core rock and "soil" samples and store them on the Martian surface, and 4) to test oxygen production from the Martian atmosphere.

Perseverance carries seven scientific instruments and boasts a total of 19 cameras and two microphones. The rover is carrying the helicopter Ingenuity, an experimental aircraft that will attempt the first powered flight on another planet. Ingenuity is a robotic unmanned rotorcraft to test the technology of finding targets of interest on Mars, and helping to plan the best driving route for future Mars rovers. It is expected to take flight in March of 2021 as the first powered flight on any planet other than Earth. Each flight is planned to be at altitudes ranging from 10–16 ft above the surface and last for up to 90 seconds per flight, during which time it could travel as far as 160 ft downrange and then back to the rover. It can use autonomous control during its short flights, although flights will be telerobotically planned and scripted by controllers at the Jet Propulsion Laboratory. It will communicate with the Perseverance rover directly after each landing. If it works as expected, NASA could build on the design for future Mars aerial missions.

Getting Perseverance's samples back to Earth will require at least two missions that are currently being planned by NASA and the European Space Agency. Mission #2 is to get the samples of the martian surface into orbit, and mission three is to connect that craft with a space vehicle capable to reaching Mars, docking with the sample-carrying craft, flying it back to earth, and positioning it for Earth re-entry.

All of this is the result of engineering, scientific planning, and the marvels of manufacturing. Leonardo Da Vinci could conceive of flying machines, but the engineering and manufacturing capabilities to create them didn't yet exist. Each year, NASA is able to reach further into the cosmos using the amazing feats of conceptual engineering, manufacturing, computer programming, and creative human minds to conceive and create components to build vehicles capable of space travel, exploration, and round trips from Earth to planet and back to Earth.

Manufacturing Talk Radio is the longest running podcast covering the manufacturing industry since it’s launch in November of 2013. It is hosted by Lewis A. Weiss, president of All Metals & Forge Group, a company that manufacturers open die forgings and seamless rolled ring, and is the main sponsor of the show. Joining Mr. Weiss as host is Tim Grady.

Manufacturing Talk Radio interviews business experts, thought leaders, senior academics, non-profit executives, noted economists, and industry icons in over 50 subject areas pertaining to manufacturing, from the current state of the economy to the latest technology and industry advances as well as sector setbacks.

New shows are posted weekly, along with relevant news articles, video specials, and other coverage to keep pace with the dynamics of the transition from dark, dirty and dangerous 20th Century production to the high-tech environment of the 21st Century.
Lewis Weiss
All Metals & Forge Group / Manufacturing Talk Radio
+1 973-808-8300