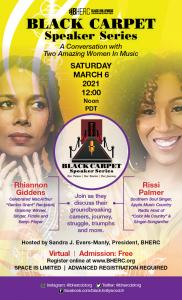 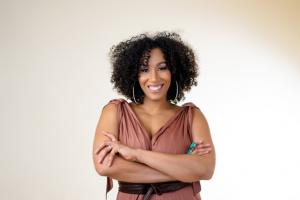 Two of today’s most influential Black Women in folk, country, and southern soul music, share their unique story and journey in honor of Women’s History Month.

A rare occasion to meet and engage live with two pioneering Black Women who have added so much to American music thru little known history, original works, performances. You do not want to miss it!”
— Sandra J. Evers-Manly, President/Founder BHERC

LOS ANGELES, CALIFORNIA, USA, February 22, 2021 /EINPresswire.com/ -- The Black Hollywood Education and Resource Center, announced today that the second Black Carpet Speaker Series, a free event providing Black entertainers a platform to discuss their careers, influences, latest works, and creative insights is set for March 6th, at 12:00 PM PDT. The series provides FREE access these unique personalities to a broad range of US, international audiences and communities including colleges and universities and can be accessed virtually online. Register at www.BHERC.org.

In honor of Women’s History Month, this live event features two of the “Amazing” Black Women Pioneers of folk, country, bluegrass, and southern soul music. Grammy winner, singer, fiddle and banjo player, Rhiannon Giddens, and “Color Me Country” Radio Apple Music Country Radio Show Host and consummate southern soul singer-songwriter Rissi Palmer. This event provides a rare opportunity to learn the little known history, influence, impact, and contributions they and other Black women like them have made – and continue to make -- along their groundbreaking journey. Participants will have unique insight into the struggle, and triumphs of pursuing a career in folk, country, bluegrass, Celtic, blues, jazz and R&B music, the African and African American impact on the art forms, and how they look forward to continuing to add their creative mark to the music industry and their impact on society in the future. Get their perception on the plight of women and others like them and what aided their progress and how they excavate, create, and promote the history of the African American experience through their music at the highest levels on stages throughout the world.

The first live virtual Black Carpet Speaker Series was a timely and rich conversation between groundbreaking female directors, Gina Prince-Bythewood “The Old Guard” and Kasi Lemmons “Harriet”, on the urgency to tell stories of black women and film directors who are disrupting the status quo. BHERC President Evers-Manly facilitated a very engaging and revealing discussion.

About the Speakers
Rhiannon Giddens is a celebrated artist who excavates the past to reveal truths about our present. A MacArthur “Genius Grant” recipient, Giddens has been Grammy-nominated six times, and won once, for her work with the Carolina Chocolate Drops, a group she co-founded. Most recently she was nominated for her collaboration with multi-instrumentalist Francesco Turrisi, there is no Other (2019). Her album, They’re Calling Me Home, also a collaboration with Turrisi, is due out this April and features songs of her heritage, sung to console her while she has been unable to go home to her native North Carolina due to the ongoing pandemic.

Giddens has performed for the President and Mrs. Obama at the White House and acted in two seasons of the hit television series “Nashville”. She is featured in Ken Burns’ Country Music series, which aired on PBS in 2019, where she speaks about the African American origins of country music. She is also a member of the band Our Native Daughters with three other black female banjo players - and produced their album Songs of Our Native Daughters (2019), which tells stories of historic black womanhood and survival.

Giddens was recently named Artistic Director of Silkroad Ensemble, developing a number of new programs, including The American Silkroad, an exploration of the music of the American transcontinental railroad and it’s builders and has written the music for an original ballet, Lucy Negro Redux (the first ballet written by women of color for a black prima ballerina), and the libretto and music for an original opera, Omar, based on the autobiography of the enslaved man Omar Ibn Said.

Giddens’s lifelong mission is to lift up people of color whose contributions to American musical history have previously been erased, and to work toward a more accurate understanding of the country’s musical origins. Pitchfork has said “few artists are so fearless and so ravenous in their exploration.”

Rissi Palmer's gift lies in reaching across boundaries. One of our most compelling singers, she is at home in R&B but made her mark in country, bringing the entire spectrum of popular music to bear on music she calls “Southern Soul.” The daughter of Georgia natives, Rissi was born near Pittsburgh and spent her adolescent years in Missouri. Raised in a musical family that loved both country and R&B, she sang in a singing and dancing troupe sponsored by a local television station at 16. She was offered her first publishing and label deals at 19, and in 2007 released the album Rissi Palmer, charting with the singles, “Country Girl,” “Hold On To Me,” and “No Air.” She followed with a Christmas single, an independently released children’s album, Best Day Ever, and an EP called The Back Porch Sessions. Her most recent release, Revival, has been critically hailed as her most personal and uplifting work yet.

Rissi has performed at The White House, Lincoln Center, and the Grand Ole Opry, has appeared on Oprah & Friends, CNN, the CBS Early Show, and the Tavis Smiley Show. She has shared stages with Taylor Swift, The Eagles, Chris Young, and Charley Crockett, and she has been featured in Rolling Stone, The Wall

Street Journal, People, Parade, Ebony, Newsweek, and The Huffington Post. Rissi can now be heard bi-weekly on Sunday afternoons on her Apple Music Country radio show, Color Me Country Radio w/ Rissi Palmer. On the show, the singer-songwriter brings to the forefront the Black, Indigenous, and Latinx histories of country music that for too long have lived outside the spotlight and off mainstream airwaves. Listen in as Rissi has riveting, funny, and necessary conversations with country music's most vital and underrepresented voices.

The Black Carpet Speaker Series in entertainment features conversations with professionals in the entertainment industry across the globe, including directors, producers, entertainers, editors, animators, cinematographers, music composers and more. The Black Carpet Speaker Series takes place March 6, 2021 at 12:00PM NOON PDT online at www.BHERC.ORG and is FREE to all. Registration is required and space is limited. To register log on to www.BHERC.org.