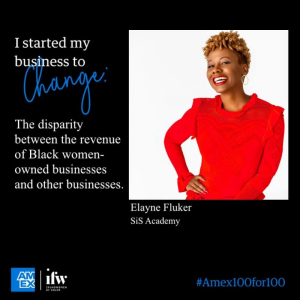 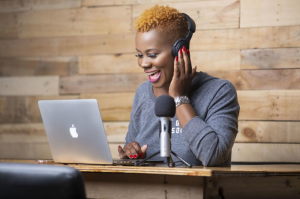 Over 500 diverse women entrepreneurs from around the world have been interviewed on Fluker's podcast, Support is Sexy 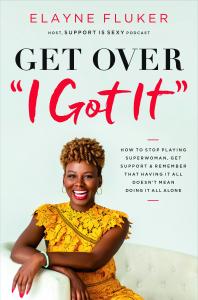 HarperCollins Leadership to Publish Fluker's debut Get Over 'I Got It' May 11, 2021

Elayne nails the concept that rest and support are a source of strength, not weakness - and the dire consequences of ignoring this sage advice. A must-read for womxn of all ages and life stages.”
— Martine Resnick, Co-Founder at The Lola
DECATUR, GEORGIA, UNITED STATES, February 24, 2021 /EINPresswire.com/ -- Elayne Fluker, Founder of SiS Academy – an online learning platform providing education to support Black women entrepreneurs is a recipient of the inaugural AMEX “100 for 100” program, which in addition to a grant of $25,000 and 100 days of business resources, she will receive business education, mentorship, marketing, virtual networking, WorkSpaces by Hilton hotel reservation credits and more.

American Express created this program in partnership with IFundWomen of Color, the leading platform for women of color to raise capital, to support Black women entrepreneurs as they work to jump start and grow their business ventures. The initiative is part of American Express’ recently announced $1 billion action plan to enhance diverse representation and promote equal opportunities for its colleagues, customers and communities.

“Black women are the fastest growing segment of entrepreneurs in the U.S. -- but still often the most underserved and least supported with everything from resources to funding -- I decided to have a curriculum that catered to our needs as women, as Black women and as entrepreneurs. Thus, SiS Academy was born,” states Fluker.

As a forward-thinking community builder, Fluker has always had her mindset on giving women the platform and support they need to advance their businesses, careers and overall lifestyle. In 2012, she founded Chic Rebellion Media, a multimedia agency that creates digital, podcast, video, television, and social content to empower women to share their stories and build their brands. Four years later she launched a popular and inspirational five-day-a-week podcast, Support is Sexy, which has more than 700,000 downloads and reaches listeners in 130 countries. On the podcast, Elayne has interviewed more than 450 inspiring women entrepreneurs, leaders, and creatives around the world about their entrepreneurial journeys, the true stories of the good, bad, and messy moments in between, and the importance of support in their lives.

This spring HarperCollins Leadership will publish Elayne’s debut book, Get Over ‘I Got It’: How to Stop Playing Superwomen, Get Support and Remember that Having it All Doesn’t Mean Doing It Alone. “Get Over ‘I Got It’ is an empowerment tool created to demonstrate the tangible ways women can ditch the dangerous go-it-alone philosophy and, instead, embrace the proven health and career benefits of a stronger-together approach.”

ABOUT AMEX “100 FOR 100” PROGRAM
The “100 for 100” program is part of American Express’ broader commitment to provide access to capital and financial education to at least 250,000 Black-owned small and medium-sized businesses in the U.S. by the end of 2024, to help them navigate today’s environment and thrive into the future.

ABOUT ELAYNE FLUKER
Elayne has served as an editorial executive at media powerhouses such as Condé Nast, Huffington Post, Essence, Martha Stewart Living, VIBE, and Latina. As an expert in media, pop culture, entrepreneurship, and women’s empowerment, Fluker has been a featured guest in front of millions on national shows and networks, such as TODAY, Nightline, Headline News, Inside Edition, CNN, VH1, CBS, BET, FOX, and Sirius XM Radio. And she has spoken at events for the United Nations, LinkedIn, Columbia, NYU, Spelman College, Howard University, the Women's Presidents Organization, the Essence Festival and more.

Former Muslim Kamal Saleem: Muslims are Seeing the Light of the Gospel

SIOUX LEGEND IN PRINT FOR THE FIRST TIME