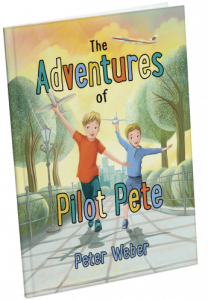 The Adventures of Pilot Pete

~The Adventures of Pilot Pete teaches children the value of passion, dedication, and hard work~

I want to connect with and inspire children to follow their passions and dreams. The book is has a powerful message for children: that they truly can accomplish anything they set their minds to.”
— Author and Contestant on ABC’s hit show, The Bachelor
NEW YORK, NY, UNITED STATES, August 2, 2021 /EINPresswire.com/ -- Peter Weber has loved airplanes ever since his father, a pilot for United Airlines, showed him the inside of a cockpit when Peter was just five years old.

After more than 20 years of passion for the sky and hard work in college, flight school, and pilot training, Peter achieved his dream of becoming a commercial airline pilot.

He shared his passion for aviation as The Bachelor on ABC’s hit show, becoming known as Pilot Pete, but he also wanted to connect with and inspire children to follow their passions and dreams.

He has done so in The Adventures of Pilot Pete, a colorful and gorgeously illustrated 32-page hardcover, intended for children ages 3-12. First-edition copies are now available for preorder at: theadventuresofpilotpete.com.

The book follows the story of Peter’s journey in becoming a pilot, and brings his emotion to life as readers see:

• That life-changing moment when his father showed him an airplane cockpit
• Peter studying aviation late into the night
• Peter completing flight school and training
• The achievement of his lifelong dream: a job with a major airline
• And touching family scenes that bring the story full circle

Peter worked on the book, his debut as an author, for nearly a year, writing its text and overseeing its illustration and design. In fact, his recent hire by United Airlines—the same airline his father flew for—precipitated a change to the book’s cover and interior illustrations to reflect his pride to fly for the airline.

“I couldn’t be prouder of The Adventures of Pilot Pete,” Peter said. “It’s full of beautiful detail and has a powerful message for children: that they truly can accomplish anything they set their minds to.”

The book, published by Blue Balloon Books, a children’s book imprint of Ballast Books, will be available in wide release in October. Pre-orders for signed and personalized copies are being accepted now at www.theadventuresofpilotpete.com. A portion of each book sale will support Pilots for Kids, a nonprofit organization dedicated to helping hospitalized children.

Speakers to Explore ‘Artificial Intelligence: Today and Tomorrow’ on July 8 as Part of BIL-T Conference Series

Author Eileen Pruett Takes Her Journey Working As A Prison Caseworker at The London Book Fair 2021.