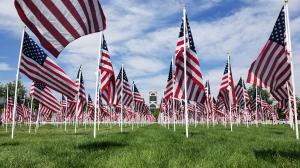 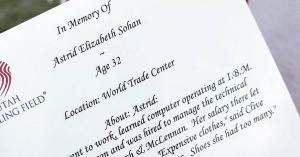 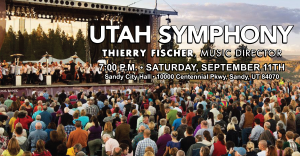 More than 3,300 U.S. flags will fly on the lawns south of Sandy City Hall at 10000 South Centennial Parkway in Sandy, UT from September 9th through 13th.

The flags of the Healing Field® are a fitting tribute to the lives lost on that fateful day and to the determined spirit of those who survived.”
— Former President George W. Bush
SANDY, UT, UNITED STATES, August 31, 2021 /EINPresswire.com/ -- Walk with your family through the Utah Healing Field® flag display. Each of the 2,977 flags represents a life lost on 9/11 with each posted flag bearing the name of an individual.

In addition, 348 flags will fly in the "Tribute to Utah’s Fallen" flag display honoring the military, police, and firefighters who have sacrificed their lives serving us all since 2001.

“Twenty years ago, on September 11, 2001, three determined firemen managed to raise the American flag on a mangled flagpole amid the vast destruction at ground zero," said Paul Swenson, president of the Colonial Flag Foundation Board of Trustees. "Images of that moment were captured by a New Jersey newspaper photographer. Within 24 hours, individuals across the country saw the first sign of hope rising from the ashes. From that powerful image of hope and strength woven in the stars and stripes came the inspiration for the first Healing Field® display of flags. On the first anniversary of the 9.11 terrorist attacks, over 3,000 flags were posted on a grassy park in Sandy, UT. One flag-one life. A memorial tribute in red, white, and blue offering hope and healing to the family & friends of each victim and in-turn the entire country. My hope is that each of us will slow down, walk through the flags alone or with our children and remember that day 20 years ago when we lost so many, and stood together."

To commemorate this special anniversary, the Utah Symphony announced plans to perform at the 20th Annual Utah Healing Field's 9/11 Ceremony, presented by the Colonial Flag Foundation. This performance, to be conducted by Conner Gray Covington, takes place on September 11, 2021, at the Sandy Promenade, 10000 South Centennial Parkway in Sandy, Utah.

Schedule of events ~ All Events are free to the public
We invite you to participate in the many events happening throughout the week.

To commemorate the solemn anniversary of the 9/11 terrorist attacks, the Utah Symphony will perform John Williams' "Hymn to the Fallen," Elgar's "Nimrod" from "Enigma Variations," Copland's "Lincoln Portrait" and Valerie Coleman's "Umoja: An Anthem for Unity" overlooking a powerful sea of red, white and blue flags representing each of the individuals who lost their lives during the attacks on September 11, 2001.

The performance is in conjunction with the annual "Honoring the Fallen" ceremony and honors each branch of the United States Military, including all fallen soldiers and first responders from the state of Utah since 9/11/2001. The patriotic observance also includes the national anthem, a flyover by four F-35's performed by the US Air Force, the presentation of the colors, a 21-gun salute, a bugle performance of "Taps" and a performance by The Utah Pipe Band.

Reserve free tickets for this event, at https://utah20th.eventbrite.com.
Seating is limited so bring your lawn chairs or blankets and sit among the flags.

Flag sponsorships available at: www.911flags.org
(Flag sponsors retain their sponsored flag kits and are able to take them home to continue the tribute.

Volunteers will post over 3,000 U.S. full sized flags south of the Sandy City Hall on Wednesday, the 8th of September, beginning at 5:30 PM. Those who have taken part eagerly return year after year to take an active part in the event. Many speak of a shared respect and reverence felt when handling the flags.

If you would like to volunteer your time to help, please register here at:

All funds raised from donations, flag sales and the car show help to make this special event possible as well as support the ongoing charitable programs of the Colonial Flag Foundation. Some of these programs are, service dogs for veterans, child abuse prevention, building Fisher Houses (serving families of hospitalized veterans), provide rehabilitation equipment, scholarships for children of the fallen, suicide prevention, food banks, homes for heroes, educational and playground equipment for underprivileged students, assisting homeless veterans, building veteran memorial parks, including the one in front of Sandy City Hall and many more!
In addition, now two decades later, hundreds of organizations—spread from coast to coast—have hosted Colonial Flag Foundation programs that bring volunteers and residents together in moving experiences, while simultaneously raising millions of dollars for local charities.

“The legacy of all these souls that were lost that day lives on through the millions of lives that are touched by those that walk among the flags and those that are assisted and uplifted through the thousands of benefiting charities,” Swenson said.

Speech and Occupational Therapies for Adults with Disabilities