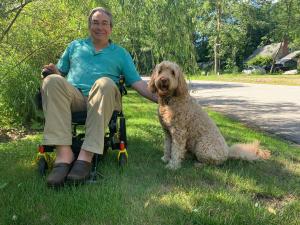 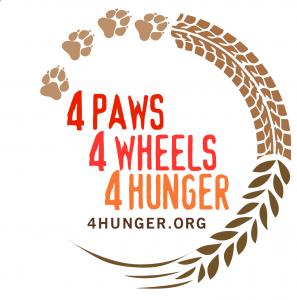 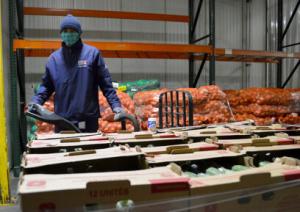 On September 18, Mark Roberts in his electric wheelchair and his dog Mocha start rolling across Massachusetts to raise awareness and funds to combat hunger.

The stimulus packages have not returned hunger to ‘normal, due to the Pandemic there is an ever-increasing demand on hunger organizations. We need to do what we can to help feed our neighbors.”
— Mark W Roberts

CANAAN, NY, UNITED STATES, September 13, 2021 /EINPresswire.com/ -- On September 18, Mark W. Roberts of Stow, Massachusetts sets out in his electric wheelchair, with his 6-year-old labradoodle Mocha, to roll across Massachusetts to raise awareness and funds to combat hunger. Mark and Mocha will roll into West Stockbridge on to Boston and finally to Provincetown. His project is called, “4Paws 4Wheels 4Hunger” and is estimated to take seven weeks.

The delta variants and other new strains of COVID-19 are prolonging the need for emergency food support in Massachusetts, America, and the world. The increase in food-insecurity caused by the pandemic is higher than ever before. Hunger is increasing in every town, city, state, and country around the world. Unlike other famines, this is a hunger crisis affecting the entire globe.

Here in the U.S. and in Massachusetts, the demand for food assistance reached an all-time high at both The Greater Boston Food Bank and the Merrimack Valley Food bank in April and May and is still significantly above pre-pandemic levels. The end of supplemental unemployment benefits and the eviction moratorium are leaving millions without incomes, homes, or adequate funds to feed themselves or their families. Food insecurity is soon set to reach levels even higher than seen last spring.

“With the stimulus packages approved, many people think that food insecurity has returned to ‘normal,’” says Mark Roberts. “But with more people lacking income and a place to live, there will be an ever-increasing demand on hunger organizations across the state and around the world. Now, more than ever, we need to do what we can to help feed our neighbors. My goal is to raise both funds and awareness to fight food-insecurity.”

Hurricane Ida, the California wildfires, the massive heat waves and droughts experienced all over America and the world this summer are horrific examples of the effect climate change is having on food-insecurity and food production. Hundreds of thousands of people in the U.S. and tens of millions world-wide are displaced at this moment, needing emergency food support following these natural disasters brought on by climate change. Additionally, the heat waves, droughts, fires, and flooding have all dramatically reduced food production.

“Sadly, this summer’s extreme weather has finally brought climate change to the forefront,” reflects Mark. “Now, the real-life, immediate effects of natural disasters on the lives of Americans and around the world are apparent. These people desperately need our help to survive and rebuild.”

The beginning of Mark’s journey will take place just over the border from West Stockbridge, Massachusetts in Canaan, New York. A launch event at the Home Range Winery (146 Flints Crossing Road) will be held at 10:30 a.m. on September 18th, featuring refreshments, live music, and guest speakers. The press and public are invited. The launch event will be filmed for the organization’s YouTube channel and broadcast live on Facebook Live.

Extensive information about this effort to bring attention to food-insecurity, including pandemic-induced hunger and the impact of climate change on food insecurity and food production, can be found at www.4Hunger.org.

NOTES TO THE EDITOR

Three years ago, Mark Roberts, until recently an attorney focused on climate change, was diagnosed with a rare neurological disease called Rhombo Myeloneuropathy, which has forced him to use an electric wheelchair when walking more than a few dozen yards. His labradoodle, Mocha, continues to be his loyal travelling companion. During his journey, Mark will return to Stow one day per week for treatments that lessen the pain of his condition and slow its progression.

The 501(c)(3) non-profit entity, 4Paws 4Wheels 4Hunger, will donate all funds raised to Save the Children, and the four major Massachusetts Food Banks that support food distribution agencies across Massachusetts: The Greater Boston Food bank, The Merrimack Valley Food Bank, The Worcester County Food Bank and The Food Bank of Western Massachusetts. These food banks provide food to over 1,000 hunger organizations all over Massachusetts and provide food for millions of food-insecure people and children in Massachusetts.

Mark has been posting on Facebook, Instagram, Twitter and TikTok (@4Paws4Hunger) and YouTube (4Hunger) about how food-insecurity is hurting the elderly, children, college students, cancer patients and millions of other people. During his seven-week long adventure, Mark will create a travel log describing his trip, the people and organizations he meets and visits along his route, and the amazing hunger organizations he is supporting through 4Paw 4Wheels 4Hunger.

Mark and Mocha will take approximately seven weeks to complete the journey, rolling and strolling for approximately six hours per day. His route of more than 300 miles through more than 50 towns will highlight food banks, food pantries, kitchens, and shelters serving those in need. His day-by-day schedule will be posted on his Facebook page: 4Paw4Hunger.
Links to Supplemental Videos
Video overview: 4Paws 4Wheels 4Hunger
Short videos highlighting food-insecurity: In Massachusetts and Around the World