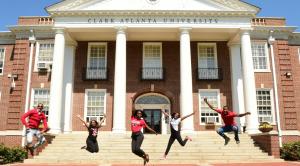 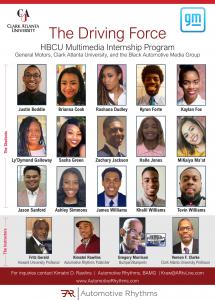 We want our students to exercise their creativity and be included in the technology career pipeline. Initiatives such as this bring them one step closer to that goal.”
— George T. French, Jr., Ph.D. , President of Clark
ATLANTA, GA, UNITED STATES, September 15, 2021 /EINPresswire.com/ -- A unique partnership has been created for the Department of Mass Media Arts students, a Division of Communication Arts at Clark Atlanta University interested in covering the automobile industry. Dubbed The Driving Force (TDF), founding members of the Black Automotive Media Group (BAMG) recruited 15 scholars to participate in the 10-week, virtual, field-credit internship, which incorporates mentoring sessions, writing classes, video production, and media courses.

Greg Morrison, a Lincoln University alumnus whose 52-year career in the industry with media outlets such as CNN, NBC, The Black Family Channel, and others, said, “This brings my career full circle. Many events in our country led to the awareness that Blacks are underrepresented in many industries, and BAMG is proud to have created the synergy between the auto industry, HBCUs, and student media hopefuls.”

Supported by General Motors (GM), TDF’s guidance is designed to expose selected candidates to career development opportunities as journalists, videographers, photographers, publicists, marketers, and digital and social media gurus covering the auto industry. Participants will showcase their newfangled work skills on various platforms at the end of the internship. They will also liaise with GM communications executives, designers, and product planners through a series of presentations and interviews.

“General Motors is proud to partner with BAMG in support of these incredible students at Clark Atlanta University. We are excited to get to know the interns, learn from them, and help contribute to their professional journey and quest for excellence,” added Joe Jacuzzi, Executive Director, Product and Brand Communications, General Motors.

TDF evolved following discussions between automakers and BAMG relating to increased programming for deserving but often neglected schools. While those conversations began to improve the diversity and inclusion of African American journalists covering the industry, an opportunity presented itself to help prepare the next generation of automotive media professionals. TDF’s mission parallels that of the Department of Mass Media Arts, which provides students with rigorous academic and professional training that is complemented by a strong liberal arts education. The department's curriculum prepares students for careers in mass media as well as entertainment, politics, personnel management, advertising, education, business, public relations, public service, speech arts, social media management, content curation, digital filmmaking, and civil service.

"We continue to move with momentum to ensure our scholars at Clark Atlanta University have access to a world-class education and that mission includes offering initiatives that focus on technology and enhancing their analytical thinking skills," said Clark Atlanta University president, George T. French, Jr., Ph.D. "We want our students to exercise their creativity, be competitive in the world of technology and be included in the technology career pipeline. Initiatives such as this bring them one step closer to that goal."

“The goal is to expand educational opportunities to HBCU candidates who may not have taken a traditional path towards automotive communications,” stated Kimatni D. Rawlins, BAMG founding member and Automotive Rhythms publisher. “My career was initiated by an internship with Jaguar and subsequent media tutelage from African Americans on Wheels magazine, which my father Randi Payton started. So, I am thankful for the industry competencies and the ability to extend my knowledge to Clark Atlanta enrollees.”

General Motors (NYSE:GM) is a global company focused on advancing an all-electric future that is inclusive and accessible to all. At the heart of this strategy is the Ultium battery platform, which powers everything from mass-market to high-performance vehicles. General Motors, its subsidiaries and its joint venture entities sell vehicles under the Chevrolet, Buick, GMC, Cadillac, Baojun and Wuling brands. More information on the company and its subsidiaries, including OnStar, a global leader in vehicle safety and security services, can be found at https://www.gm.com.

About the Black Automotive Media Group

The BAMG is a distinguished group of Black reporters, publishers, writers, and entrepreneurs representing over 200 years of combined experience in automotive journalism within radio, television, print, experiential marketing, and social media. BAMG members either work for or own various automotive media platforms targeting diverse audiences. BAMG’s primary objective is to bring equity and equality to Black professionals who work in and around the automotive industry. For additional details regarding The Driving Force HBCU internship program, please visit AutomotiveRhythms.com.

Long Island, New York Based Realty Seeking To Add 100 Realtors Before Spring Of 2021