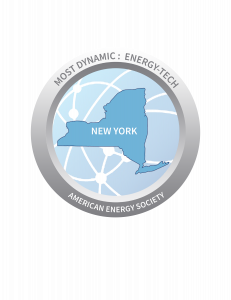 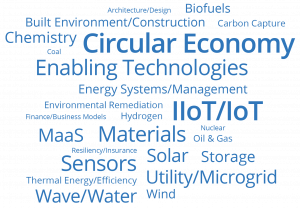 Energy- and climate-tech subsectors supported by US incubators and accelerators, ​by word-cloud frequency distribution.

New York may not generally be viewed as an epicenter for the energy sector like Houston, but the influence and impact of New York State on energy- and climate-tech innovation is clearly unrivaled.”
— Eric J. Vettel, PhD, President, AES

PALO ALTO, CALIFORNIA, USA, September 15, 2021 /EINPresswire.com/ -- American Energy Society has completed a two-year study of all U.S. incubators and accelerators of energy- and climate-tech and has determined that New York is the most dynamic and innovative state in the U.S.

The global energy sector is in the early stages of a revolution—the greatest scientific, engineering, and political change in human history — and the next generation of energy and climate technologies are being developed today. The American Energy Society has identified 387 active incubators and accelerators fostering the next generation of energy and climate startups in every state in the U.S., the District of Columbia and Puerto Rico.

The report is based on comprehensive research of all programs accelerating energy- and climate-tech innovation, broadly conceived, excluding universities and government agencies. It was followed up with extensive interviews of program managers and industry leaders.

Research demonstrates that the scope and scale of energy- and climate-tech innovation is widespread across many sub-sectors, thought 73% of all resources (talent, capital, and programs) are concentrated in cleantech, with the rest evenly distributed across fossil fuels, food and agriculture, water, infrastructure, and the built environment. Research confirmed the popular assumption that California and Massachusetts are very active centers of energy- and climate-tech innovation, but it also garnered new insights. Oregon and New Orleans are lesser-known epicenters of innovation, and Hawaii, Boulder, and Alaska are extremely productive.

Perhaps most surprisingly, New York State came out ahead as the most dynamic state for energy innovation. Unlike the pockets of dense innovation in California and Massachusetts, New York has vibrant and productive accelerators and incubators spread across the entire state, from the development and deployment of new batteries supported by NY-Best along the “storage-beltway” across Upstate New York to the promotion of sustainable cities in New York City by Urban Futures Lab, and from the lab-benches at Binghamton and Cornell to pilot deployment by NYPA. Additionally, Climate Week NYC (Sept. 20 - 26, 2021) brings together stakeholders in a can’t miss annual event that only a "City That Never Sleeps" could host. A key to New York’s success? The New York State Energy Research and Development Authority (NYSERDA), a public benefit corporation with deep pockets and an extensive network devoted to the energy transition.